I didn't sleep last night because I volunteered to guard some stuff all night. It was actually a rather enjoyable evening. CPT Jacob's and I got some pizza and 'dew, and had a late dinner with the two Sergeants that stayed up with us. We played a card game called "School Money" and spent some quality time hanging out. It was a great evening!
I knew the day was going to be long, but it actually went by faster than I anticipated!

CPT Jacobs and I drove around Ft. McCoy during some of the morning, learning the roads and seeing some the development. He closed a range and we watched many of the Soldiers trying to qualify on the ranges. I was able to spend a lot of time with these Soldiers - getting to know them and encouraging them in their qualification efforts.

Later that afternoon I went to CH Jenkins to the PX to get a haircut and to do some shopping. I saw the end of Richy Rich on TV while waiting for my cut! Good times! Remember that movie?! I love how the mom and dad had to sing to open the vault! And the vault had all of their "priceless" memories! No gold! Classic!

The best time of this whole weekend was when CPT Jacobs picked me up and brought me over to visit the FWD det of our unit (getting ready to deploy). They are on lock-down here, so they can't leave the Ft. I was thrilled to see SGT Sheets and SGT Gross and encourage them as they prepare to leave. I wish I could have spent more time with them...

We had Chapel later in the evening - about 2000 (8pm). Justin (the other CC) and I spent some time in prayer before chapel began, and I believe God blessed that.
We didn't have a large number arrive for chapel, but I knew that it was just as important that I was able to spend a lot of time with these Soldiers on base during this weekend. I also learned that many Soldiers were on detail during chapel...hmm...

The service itself went well. CH Jenkins spoke on Sampson, I offered a prayer - focusing on 9/11, did some music stuff, and Justin gave a benediction and also an opening prayer. Very interesting combination of CCs and CH. All of us are from totally different worship backgrounds!
Ok, so here's the best part! We didn't meet in a chapel building...as defined by what one may call a chapel. Instead, we met in an office-style building, with a few desks and chairs. No steeples, crosses, or ornaments. But look at this picture of where we met! 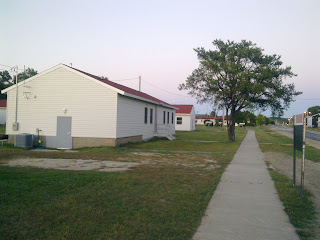