Today's Groupon was for Flattop Grill - a REALLY good stir-fry place that Lauren and I had been to with our friends Kelly and Nicolas in May. The Groupon SOLD OUT after over 10,000 had sold!
My friend Keith Mayer returned from Ukraine today - I have lost count on how many times he has been there! Probably 3 times as many times as me! I hope to go back someday soon.
Also - today as work, I had the opportunity to help escort some of the seniors who were evacuated from Jenkins, back into Jenkins to recover some of their belongings. In case you didn't know, Jenkins is Moody's married housing (mostly). It also housed many elderly folks as well - because they lived there when Moody acquired the building years ago. So - there was an electrical fire that broke out and everyone had to be evacuated to the student dorms. Praise God it's summer and that we had a place to put everyone! But PLEASE pray that Moody is able to complete the repairs before school starts and everyone moves back! It is good that we are able to minister to these folks in this capacity (giving them housing, free food, etc), so I consider that to be a blessing. But please pray that this won't turn into a nightmare for the returning students! If you want to read about it more - click here! And if you feel led to donate to the financial support effort, click here!
Well - that's about it! Kye said goodbye to Brittney today, because Kye won't be around later this week for Britt's last day. So I took a picture :)
- Mc 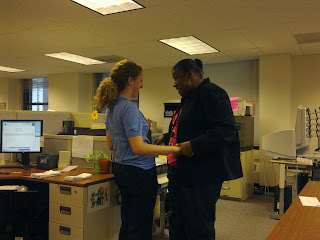