He or She is due January 28th. We had an ultrasound today and the baby is totally healthy and growing fast! The little one displayed lots of karate moves with kicks and bouncing, but quickly settled down, put up its feet, crossed its legs and put its hands behind its head (like daddy, like mommy ;) ) 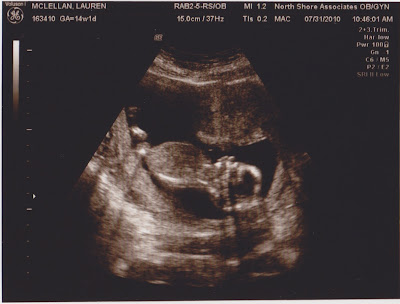 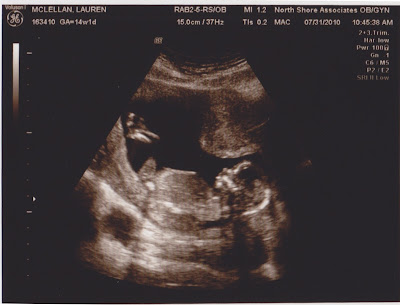 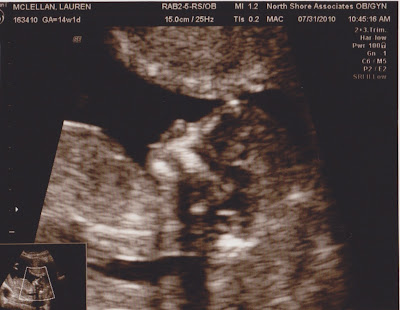 Lauren went into the doctor's a month ago due to abdominal pain - turned out she had a large ovarian cyst that would have to be removed if it kept getting larger. Praise God the ultrasound tech couldn't find the cyst at all today - it totally disappeared! Thanks to everyone for their prayers!
Last weekend we had a blast at Jake and Kristen's wedding. Congrats guys! The wedding was beautiful and the wedding party did a Bollywood dance routine that was fabulous.

We shared the baby news with our parents last weekend as well. They were shocked but are all so excited to be grandparents! We got some great videos of their reactions :)
We first announced the big news to Lauren's parents and sister. We had put a one-sie on our cat which said "Gonna Be a Big Sister." Took a picture of the cat (she was a little grumpy about it, but overall cooperative) and put it in a grandparents picture frame. We gave the photo to them as a gift...it took them a moment to figure out what the gift meant, but their simultaneous reaction is priceless. 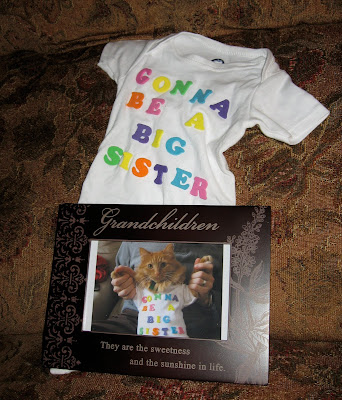 We told Micah's parents, siblings, and our good friends Jon and Katie after church at Old Chicago. Micah's mom loves precious moments, so we bought her one of a grandma holding up a baby outfit - very cute. Micah had been searching for a nice Bible to give to his dad, so Micah bought a cool army Bible and wrote on the inside - To Grandpa Scott, From Baby Mc, Deploying on January 28th.
More pictures of our weekend in MN to come!
Posted by M+L at Saturday, July 31, 2010