Today was busy, but good...and also weird.
Early this morning I took Lauren up for a doctor's appointment. We were in and out. Lauren had 2 ovarian cysts - one was large and border-line surgical. The other was smaller and not really a problem. The point of this surgery was to see how the cysts were coming along, and to maybe hear the baby's heartbeat as well!
Our family and friends have been praying that the cysts would have shrunk, and I want to thank you all for doing so. When the technician checked on the ultrasound, in regards to the large cyst - she COULDN'T FIND IT - because it DISAPPEARED! The smaller cyst was still getting smaller! Praise the Lord! Thanks so much for your prayers! That was definitely a blessing! To top it all off, we were able to see our little baby, just chillin'! Check out the post on the 31st of this month!
After the appointment, I dropped off Lauren at work, then went to work myself. Some "mysterious" Agent(s) had brought bagels earlier that morning, so there was one left waiting for me!
Brittney gave devotionals today as well - she's leaving soon for good since she graduated school and will be moving home to her family. We are going to miss her greatly.
Later after work, I had to go BACK to drill for an evening formation. I showed up early, but apparently I still missed the actual formation. I'm really confused on how my drill functions, but I'm praying that I'll be able to figure it out soon! It was still good I came because I was able to meet CH Spitler in person - who is basically CH Jenkin's supervisor and superior. He's a Moody graduate from the undergrad program from a while back!
I hung out at the unit, did some brainstorming and future planning, then went home to crash! Crazy day! 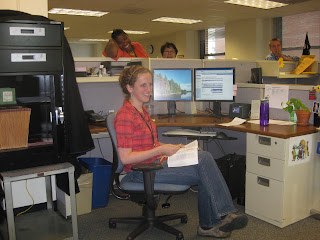